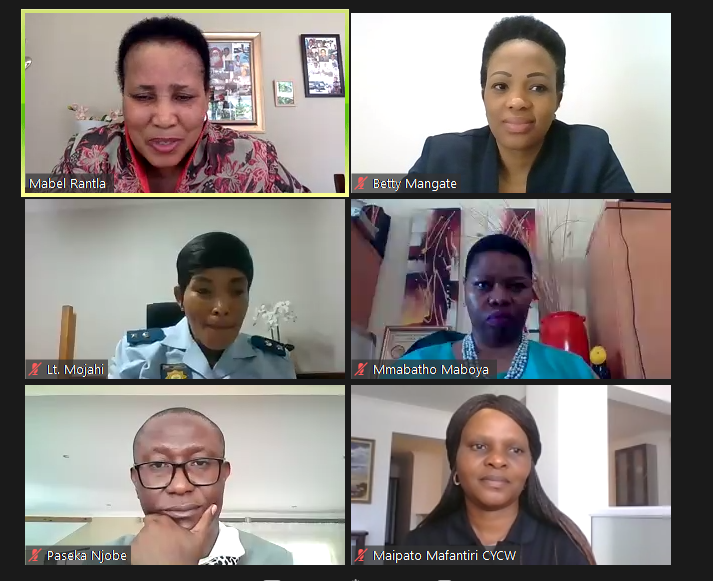 Joining the Foundation’s CEO, Mmabatho Maboya, on the programme were Lieutenant Colonel Majohi from the Free State SAPS, Betty Mangate from the Department of Education, Paseka Njobe from the Department of Basic Education, and Thari Child and Youth Care Worker, Maipato Mafantiri. The programme was facilitated by Mabel Rantla, the former head of National Office on the Rights of the Child.

“In the context of Women’s Month we chose to spread awareness of the work of the Thari programme to create safe and empowering school communities that are free from violence, inclusive and gender sensitive,” Maboya said.

“There is a relationship between the vulnerabilities of women and children that the Thari programme addresses. Vulnerable women impact on the sense of security and well-being and the development of children; vulnerable girl children may grow up to be vulnerable women; and GBV and other abuse of women at home may socialise boy children to be abusive to women,” she said. “These factors impact on the learning outcomes of children,” she said.

Thari is being piloted at eight schools in Botshabelo Township in the Motheo District in the Free State, and at Diepsloot Combined School in Johannesburg.

The Department of Basic Education’s Njobe said violence and GBV in schools was on the rise. He said studies show that 32% percent of learners have been bullied at least once in the past month, 32.4% percent report being physically attacked in the last year, and 36% percent of learners report involvement in a physical fight in the last year. He added that a 2016 Optimus study showed that one in three young people had experienced some form of sexual abuse before the age of 17. Boys experience sexual abuse at a slightly higher rate (36.8 %percent) than girls (33.9% percent) and they are far less likely to report the abuse to the police.

The Free State Department of Education’s Mangate said there is a need for psychosocial support for children from an early age and for parents and educators on an ongoing basis. She said psychosocial support is the care provided to children and educators who have additional emotional, mental and social needs due to trauma experienced in their lives, including from extreme poverty and exposure to violence.

“There are several ways in which the Department is working with programmes like Thari,” said Mangate. “We recognise the need for nutrition, health, nurturing relationships, communication, and play and learning activities. We provide a comprehensive continuum of services based on these needs and address them with the help of parents, teachers, the community and our partnerships. This fight cannot be fought alone,” she said.

Lieutenant Colonel Majohi said the Free State SAPS had 111 police stations linked to 1 112 schools, and 71 schools have been identified as violence, bullying and gangsterism hot spots.

“We visit the schools often, speaking directly to the children,” she said. Over the past year, SAPS has developed a region-specific anti-gang and drug strategy, conducted 884 awareness campaigns in the area, and appointed junior commissioners to advocate against violence and crime on the ground at each school.

Maipato Mafantiri, a Thari Child and Youth Care Worker (CYCW) said “Thari has committed to work with children, families and community services in an effort to bring back a culture of support for one another “so that we can feel safer and less alone in this new world.”

She explained that when teachers or caregivers identify a child with challenges, they refer the issue to a CYCW for assessment. Home visits are conducted and factors playing a role in the child’s behaviour are explored. Where necessary, additional services offered by various Government departments are engaged.

“This is not a short-term programme,” she said. “Building trust with community children and families is a long journey, but we stay with the family until a change in behaviour is observed and reported,” Mafantiri said. “Through the process, the child will be offered support through our aftercare programmes at the Safe Parks. This includes access to educational support activities, physical or sporting activities and recreational activities, which have all been designed to encourage learning and engagement.”

Maboya concluded that one of the key messages of the webinar was partnership. “Without leaning on each other, the road to a better, safer future, one that sees our families feeling safe in their communities and our children finishing school, will be a long one. Together, we can achieve much more and at a greater pace,” she said. The webinar called for financial, in-kind and collaborative partnership with the Thari programme, as may be appropriate, from the corporate, state, community and fellow NGO sectors.

Watch the recording of the webinar below.