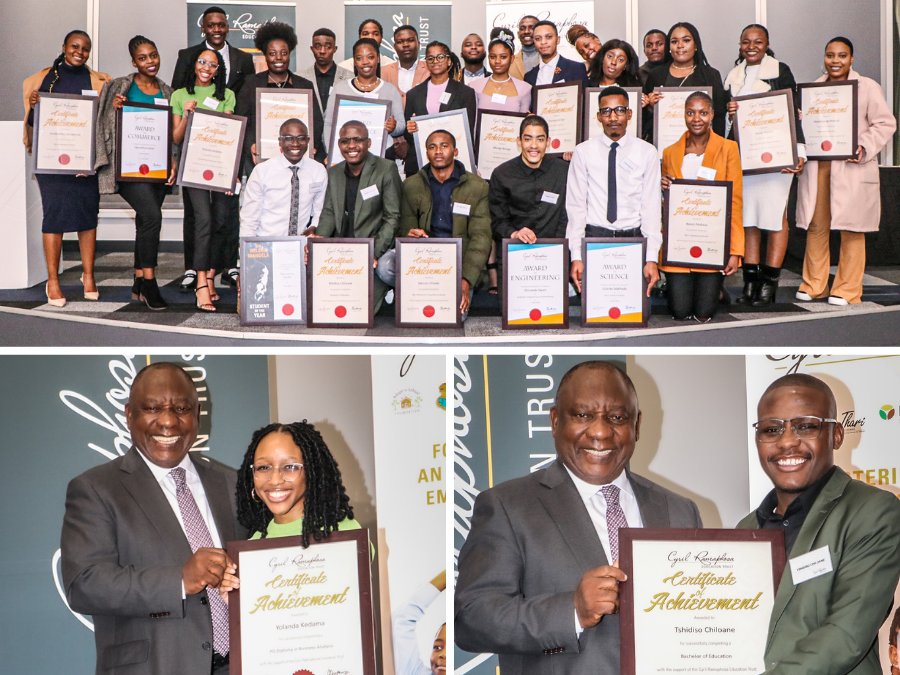 The Cyril Ramaphosa Education Trust (CRET) celebrated this past year’s academic successes with a well-attended ceremony held in honour of top achieving students and graduates who have completed their studies through the Trust’s prestigious bursary programme.

The annual event was held in Sandton on 07 July 2022 and was attended by the founder and Patron of the Cyril Ramaphosa Foundation, President Cyril Ramaphosa, delegates from the Foundation’s partner entities, CRET key sponsors, representatives of various youth-led organisations, and graduates.

Ramaphosa expressed pride in the results produced by the Trust’s unique model which provides both financial and psychosocial support to its beneficiaries. “The aim of the Trust is to be a vehicle for grooming young people for the task of positively impacting South Africa and changing it into a country that will reach the highest heights of development,” said a beaming Ramaphosa during his address on the CRET awards stage.

Giving a keynote address, CRET Executive Director Chantelle Oosthuizen commended the students’ will to succeed even when faced with significant disruptions to education — while also saluting the CRET model for its ability to adapt to the challenges brought about by the pandemic. “None of us were prepared for the advent of a pandemic. The uncertainty could have resulted in paralysis, and we were tested in just how agile we are as a programme. In the past two years, mental wellness became our primary focus. The distinction from other bursary programmes lies in our holistic approach. It’s not merely about supporting them financially with accommodation and tuition. Over and above, every one of our CRET students is nurtured individually and they have access to mentorship, tutoring, volunteering to participate in holiday programmes, driver license training and other soft training skills. Of course, none of this would be possible without our founders and help from our donors.”

CRET reflected on the academic triumphs of seven top achieving students and 23 graduates who have also shown exemplary academic performance, distinguished leadership, and impactful community service during the course of their tertiary career. The award for overall student top achiever went to Thamsanqa Gazide who is currently pursuing a degree in International Relations.

Former CRET bursary programme alumni Cyril Madiba and Tracey Nkosi were also in attendance — with the former being recognised for his involvement in founding the Cyril Madiba Empowerment Foundation and his leadership of the CRET Alumni Advisory Board that helped set-up a subsidiary bursary scheme that is paying it forward by putting other exceptionally performing students through school. Nkosi attributed her success as a qualified chartered accountant to the CRET programme.