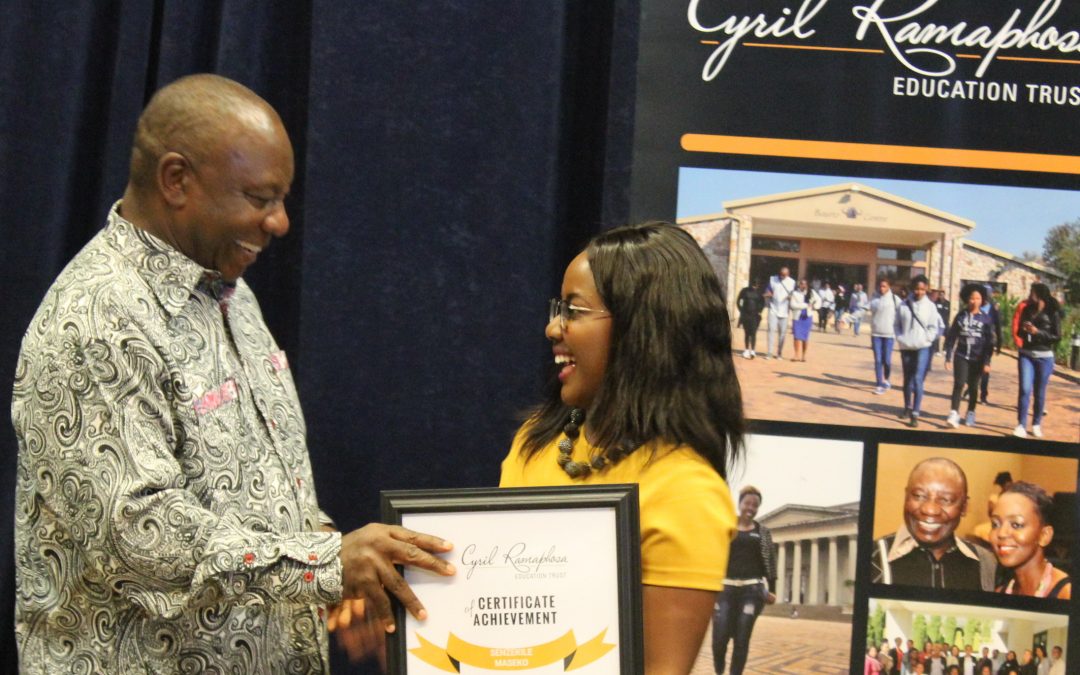 The CRET scholarship programme does not only facilitate academic access, but also contributes to all-round youth development. In addition to funding, the programme offers mentorship, leadership development, and holiday programmes for the students it supports.

At the beginning of 2017, CRET had 64 students enrolled in the programme and by the end of the year this figure had nearly doubled to over 100 students. These students achieved an overall pass rate of 86% in their respective academic fields and three of these became members of the International Honorary Golden Key Society.

This year, 15 CRET graduates were celebrated for outstanding achievements. The ceremony was attended by founder President Cyril Ramaphosa, the foundation’s CEO, Donné Nicol, and CRET alumni. The programme director for the event was alumnus Dr Sazi Nzama who, with the support of CRET, graduated in 2016 with a Bachelor of Medicine and Bachelor of Surgery (MBChB) degree.

The Top Academic Achiever Award went to Senzekile Maseko, who achieved six distinctions out of a possible eight. Other awards include the top three achievers of the Arts, Commerce and Science faculties, the most improved student, and the Nelson Mandela Award.

The Nelson Mandela Award is given to a student who displays the ability to be successful in all aspects of the programme; excelling in academics, leadership, cultural, sporting, and community service. This year CRET’s Nelson Mandela Award went to Palesa Mokoena, who prioritised the foundation’s ethos of giving back throughout her tertiary education, which included leading a fundraising initiative to buy stationery for schools in need.

“We are all encouraged to give back to the society that has made us and shaped us into what we are today,” says Ramaphosa.

The value of assisting others, as they themselves had been, is well appreciated by the students. Seven students have set up their own non-governmental organisations (NGOs), while 16 others are actively involved in community enhancement projects. The CRET Alumni Fund has contributed over R270,000 to the bursary programme since its inception in 2015.

Inspired by the students, Ramaphosa said: “South Africa is on the move, it is taking off, and you represent that.” He reiterated his call on the students, as with all South Africans, to make their contribution to the development of South Africa