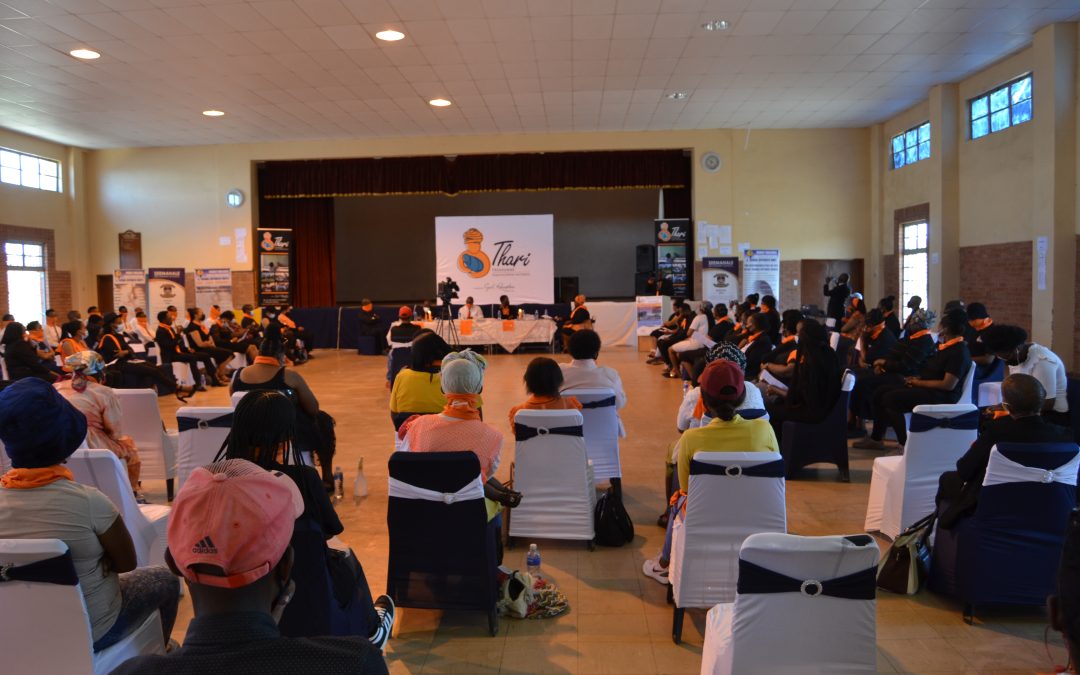 The Thari Programme is a pilot programme established in 2017 by Cyril Ramaphosa Foundation to tackle social ills in eight schools of Botshabelo in the Free State Province and a school at Diepsloot in Gauteng Province. The Foundation found that the abuse, neglect and domestic violence directly impacts learning outcomes. Interventions to curb violence in schools; needs to be extended beyond the school itself. Parental and community support is essential.

In continuing its work in Botshabelo, the Thari Programme commemorated 16 Days of Activism for No Violence against Women and Children at Seemahale Secondary School in Botshabelo on 3rd December. The campaign is a global United Nations campaign from the 25th of November to the 10th of December to raise awareness about violence against women and children. This year marks the 30th Anniversary of the global 16 Days campaign under the theme:

“Orange the world: END VIOLENCE AGAINST WOMEN NOW!” The orange colour, which signifies hope, is selected as part of the theme this year to inspire hope through activism against violence against women and children.

The programme included dialogue and panel discussions between beneficiaries and key stakeholders such as the National Prosecuting Authority, Family Violence, Child Protection and Sexual Offences Services Unit from South African Police Services, Victim Empowerment Unit from Department of Social Development and Department of Health. The Topics covered included the judiciary’s role, the role of law enforcement, victim empowerment by Women and Child Protection Services, and medical assessment alongside treatment and support for victims of Gender-Based Violence (GBV).

According to UNICEF, at least a third of young girls in South Africa have experienced violence from someone they know. Similarly, acts of violence against women are often carried out by ‘intimate partners’. Between April and June 2020, 55% of GBV-related murders were perpetrated by husbands or boyfriends. The WHO stated that approximately 12.1 in every 100 000 women are subject to femicide in South Africa each year and that this statistic is five times higher than the global average of 2.6.

“Although gender-based violence is a global scourge, in South Africa, it has been identified as a second pandemic to the COVID-19 pandemic, Bernice Maponyane, a Programme Manager from Adopt-a-School, a partner entity of the Foundation that implements the Thari Programme. She said the Centre of Justice and Crime Prevention (CJCP) reveals that one in five secondary school students experience violence. Types of school violence includes threats of violence, psychological abuse, robbery, physical assaults, gang violence, corporal punishment, sexual violence and bullying. “Our experience as the Thari programme has shown that having the necessary conversation around women and child abuse is a starting point to dealing with gender-based violence,” Maponyane said.

The Thari Programme rests on three pillars: Psychosocial Support, Safe Parks and a Multisectoral Approach. Psychosocial support services intends to create a safe learning environment. The Thari Safe Park was established in 2019 to create a secure space for children to go after school, at weekends and over school holidays. The Multisectoral Approach consists of multiple stakeholders that provide various support services to learners, educators and the community. Through these pillars, Thari has reached over 2 130 learners through the Safe Park, over 5 100 participants through awareness campaigns and registering over 830 children since January 2019.