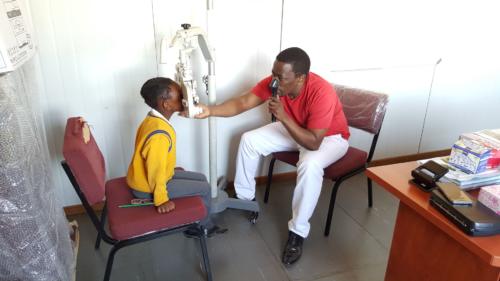 407 learners from 12 primary schools in Villiers, Sasolburg, Vredefort, Tweeling, Steynsrus have received spectacles after the learners eyes were screened and tested.

The project, which was part of raising awareness about the importance of eye health, took place from 21 September to 18 October, which marks Eye Care Awareness month in South Africa.

The District Whole School Development Programme (DWSD) run by the KST in partnership with the Free State Department of Education, offers vision screening, testing and the provision of spectacles to primary school learners if required in the Fezile Dabi and Motheo districts. The project has to date benefited 150 530 learners who have underwent vision screening, 6192 learners have received spectacles and 612 learners have been referred for further medical attention.

“Some of the common symptoms that we encounter with learners during screening and testing include blurred vision, headaches, tearing when doing visually demanding tasks reducing the eye aperture when attempting to focus, tilting the head to one side. And some of the common vision impairments are Myopia (nearsightedness), Hyperopia (farsightedness), Astigmatism (when the cornea is shaped more like a rugby ball rather than a soccer ball, thereby making clear focus impossible), Presbyopia (poor reading vision that is age related),” said Dr Thomas Dire Optometrist for the KST vision programme.

The vision screening is carried out by Community Health Workers (CHW) who are part of government’s Primary Health Care re-engineering initiative and are trained by the DWSD programme and work in collaboration with the Free State Department of Health. In addition, the programme has also trained educators on vision screening and learners that require further medical treatment are referred to the Free State Department of Health.

“Some eye disorders onset gradually and are undetected with no obvious symptoms until it is too late for example open angle glaucoma. Some have a better prognosis if intervention is earlier on,” concluded Dr Dire.