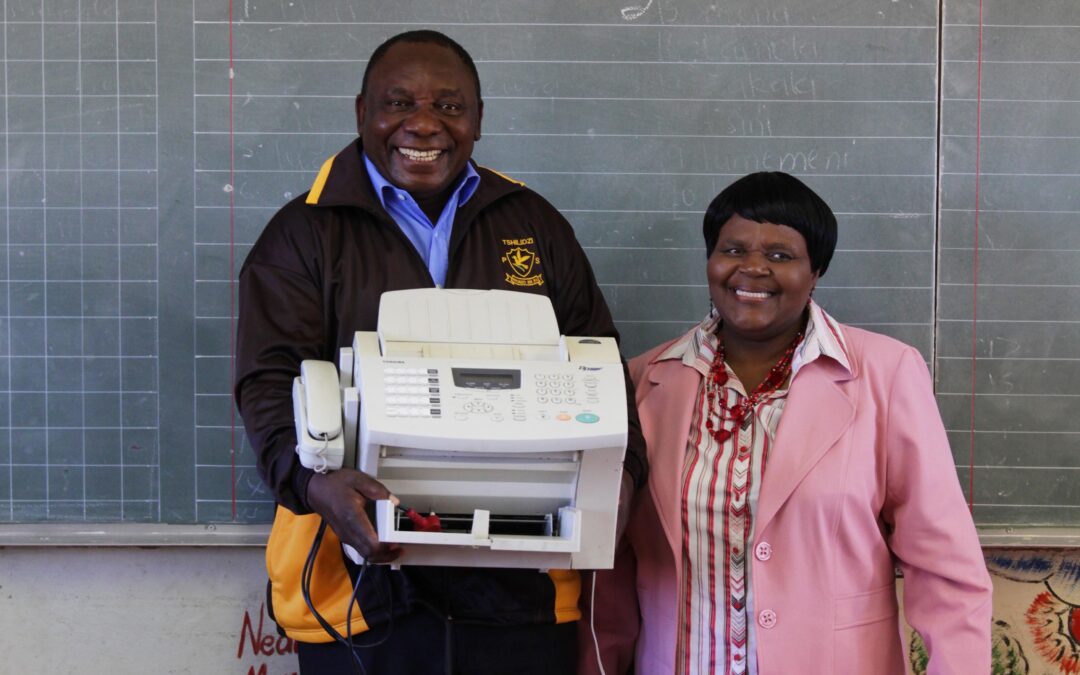 In the storeroom of a school in Soweto, draped in cloth to protect it over the years from the dust, is a fax machine. Many may not to know what a fax machine is. At its height in the 1980s through to the early 1990s, it was a technological marvel for the instantaneous transmission of documents over distance. A story of Ahmed Kathrada, at the time of his release from prison after 25 years, is recalled. It is told that he was called in to the office of the head of the prison who informed him that he had received a fax from Pretoria instructing his release. “What’s a fax?” Kathrada asked. He could not fathom how a piece of paper inserted into a machine could come out over a thousand kilometres away. As Jonathan Coopersmith, the author of “Faxed: The Rise and Fall of the Fax Machine” (2015) explains, “… a fax machine scans an image or a document line by line, then transmits that scan to a receiver where it’s printed out and reproduced”.

Today, made archaic by the advent of internet-based technologies, the fax machine at Tshilidzi Primary School in Chiawelo, Soweto assumes the status of an heritage artifact. This is so more because of the meaning it embodies. That particular fax machine was a donation to the school by President Cyril Ramaphosa in 1999, and represents the beginning of the development of the Adopt-a-School Foundation, which celebrates its 20th anniversary this year.

At the time, President Ramaphosa had entered the world of business, and was contacted Ms Stella Nemakhula, the principal of Tshilidzi Primary, at which he was a pupil in the 1960s, to donate a much-needed fax machine. When he visited the school, fax machine in hand, he was struck by the range of its needs, as well as those of other schools, and was inspired to do more. Thus began the story of the formation of the Adopt-a-School Foundation by President Ramaphosa and his old comrade Dr James Motlatsi. They rallied support for Tshilidzi Primary and the school was adopted for support by the investment holding company, Johnnic, as well as Gold Fields, a mining company. This laid the basis for Adopt-a-School’s partnership approach with private sector entities for the improvement of schooling.

Following the establishment of Adopt-a-School Foundation in 2002, eight schools were adopted for support by 2004. Initially, the support focused on infrastructure needs, however it was soon recognised that for quality education to be achieved more than infrastructure was required. Schools also needed the development of effective leadership and management systems, educator skills, curriculum structures, and improved learner well-being and safety. Thus the more holistic Whole School Development model was developed.

Today, in its 20th anniversary year, Adopt-a-School counts 243 schools that it has adopted since inception, improving the governance, academic, infrastructural, and social and security environments in schools. Scores of new classrooms, science and computer laboratories, libraries, and administration and ablution facilities have been built, over 6 000 educators developed in curriculum, leadership and management, and more than 700 000 learners benefitted.

Adopt-a-School is evolving its holistic model further with the piloting of the Thari Programme to address the impact that violence and vulnerability has on children and their learning outcomes. And its partnership with Kagiso Trust’s Beyers Naude School Development Programme to establish KST, has taken the Whole School Development model even further. KST drives institutional and systemic change through a district based approach. It has supported 374 schools, developed over 30 000 educators, and benefiited a further more than 700 000 learners.

And it all began with the donation of a fax machine. A true heritage relic.